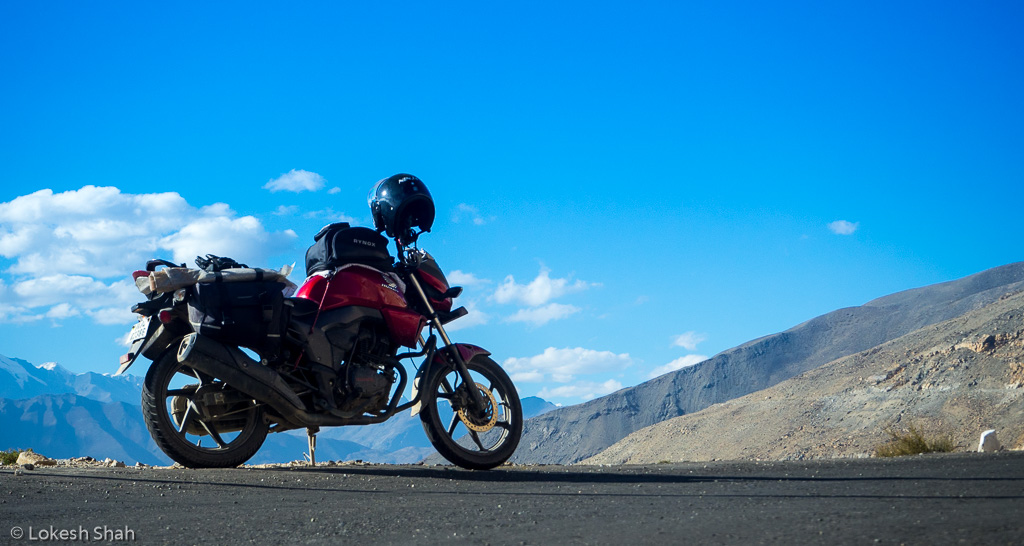 The morning ritual repeated itself. Up around 0500 and on the road before 0600. I was going to take it easy today.

I did not vacate the room as I was going to Chitkul and come back. Would pick up the saddle bags at that time. Packed a few things in the tank bag and set off.

The morning was much colder than I had thought.  I was desperately looking for a hot cup of tea.

As I rode out, my fingers were freezing in the cold. Everyone was asleep at the hotel I stayed in and so seemed to be in the entire town. Everything was closed. Inside the jacket I was wearing a sweat shirt which worked well. I also had a wind-proof outer shell which I could use if needed. 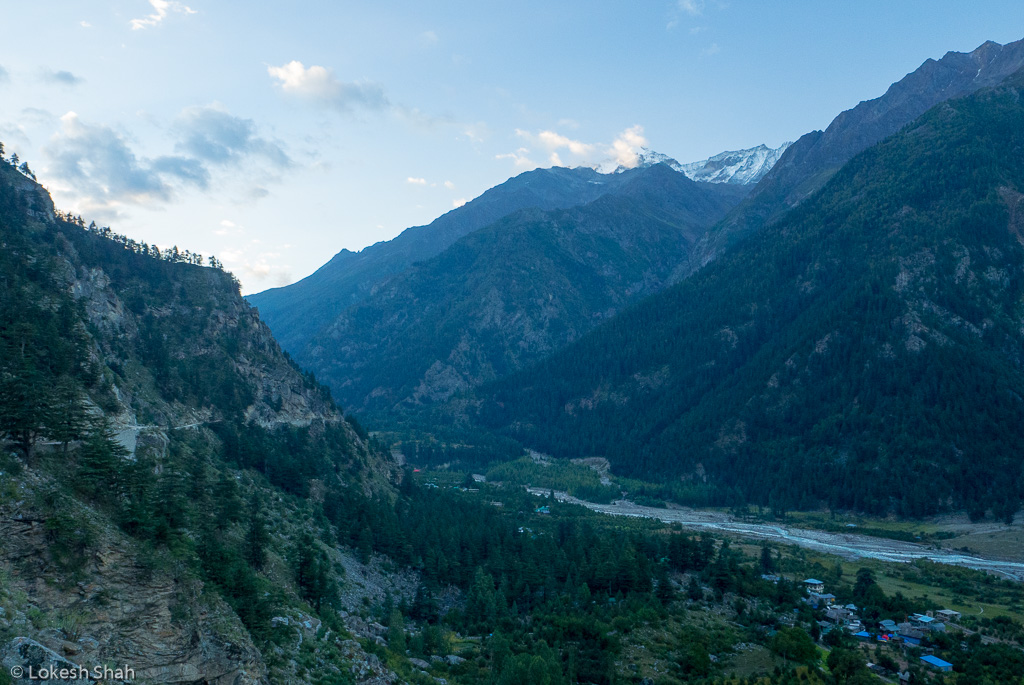 Village of Batseri spread out in the Baspa River Valley.

First lights of sun on the peaks ahead.

Village of Basteri looking back.

Apple orchards on the way

Apple tree, though not as laden as at lower altitudes. 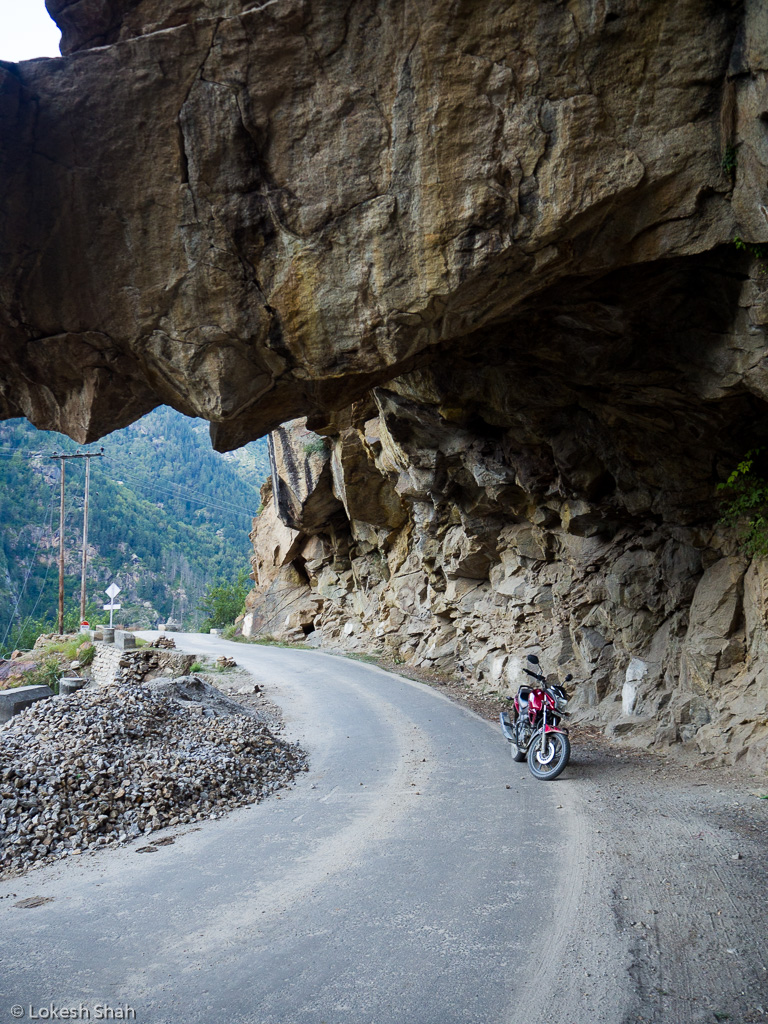 Another cut in the rock road marvel.

The road was narrow and in pretty bad condition. Going was slow and it took me an hour to cover 25Km to to Rakcham. I was happy to find a couple of open shops there. Stopped for tea and breakfast.

Over breakfast, talked to a few people from Uttrakhand who were building irrigation canals for a government project there. They had come down for tea from their camp. 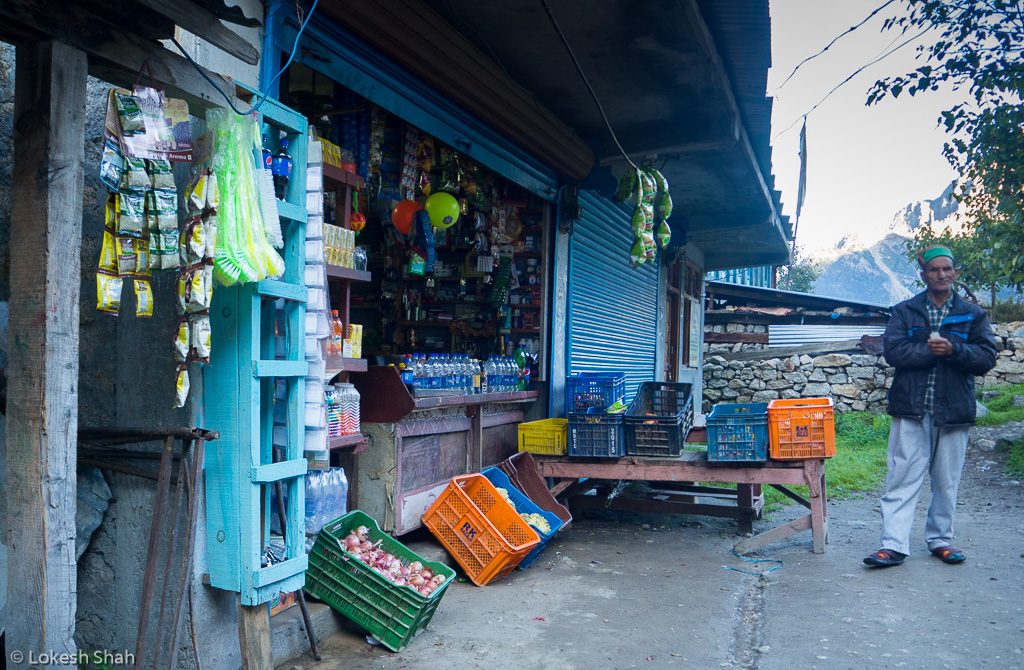 Dhabha-cum-grocery shop at Rakcham. The owner is also standing besides. 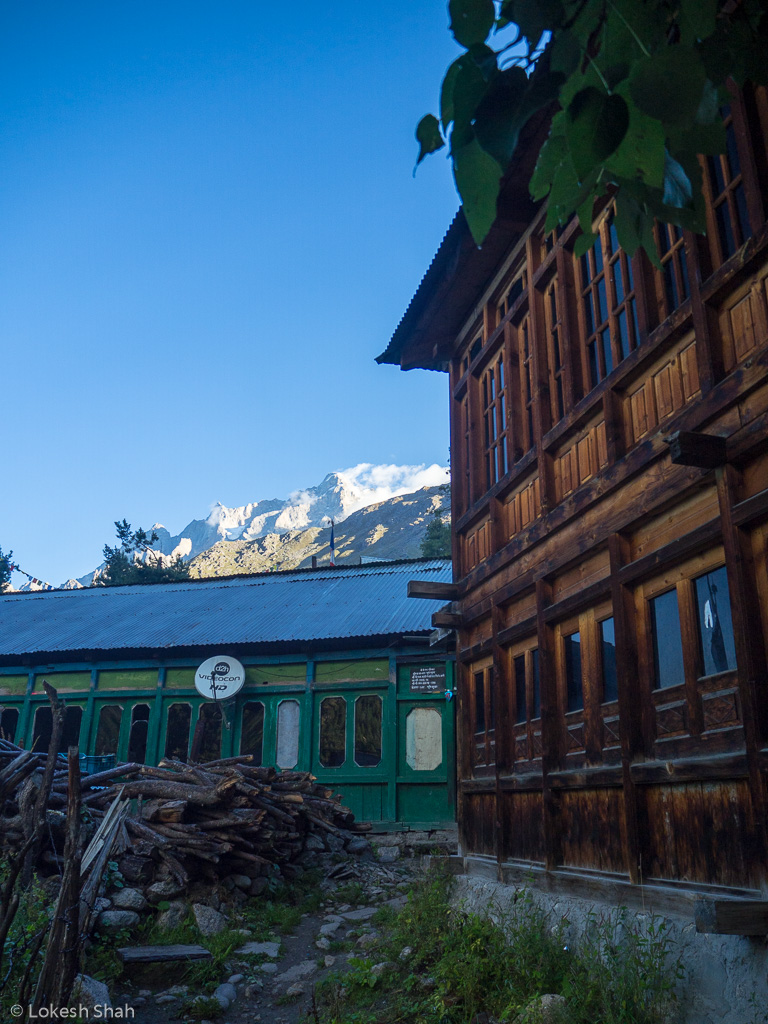 Traditional wooden houses of Rakcham Village. These used to have slate roofs which has given way to tin sheets.

Rakcham village with the backdrop of Kinnar Kailash

Traditional wooden houses of Rakcham Village with a slate roof.

After a good breakfast, I started again for Chitkul. The sun was out and it was nice an warm. The road condition went from bad to worse. Not in a hurry I made it a relaxing ride, stopping often to take in the views.

After a quick stop at ITBP camp to make entries, I reached Chitkul. 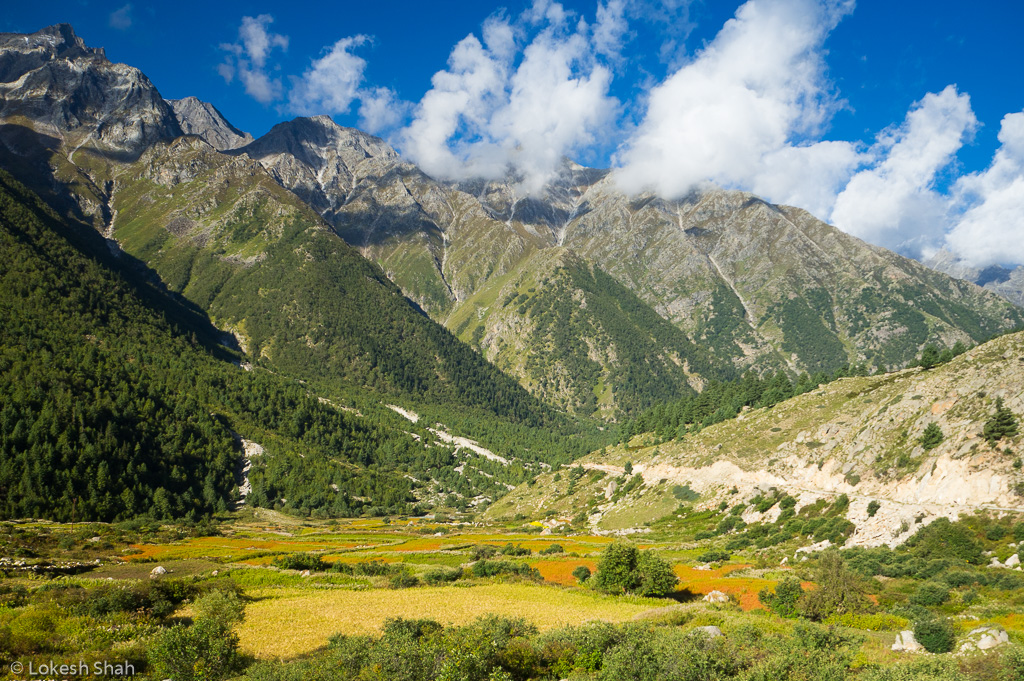 Baspa river below Chitkul shining silver in the morning sunshine.

Chitkul itself is nothing to speak of. It is simply a cluster of buildings catering to the tourists with small shops and hotels. There are a couple of temples which I wasn’t keen on visiting. Locals have fields surrounding the village and houses spread all over. Construction activity was in over drive as winter was approaching fast.

I drove across the village till the last point I could go to without a permit. Then took a trail down to the river and chilled for a while watching the water flow. 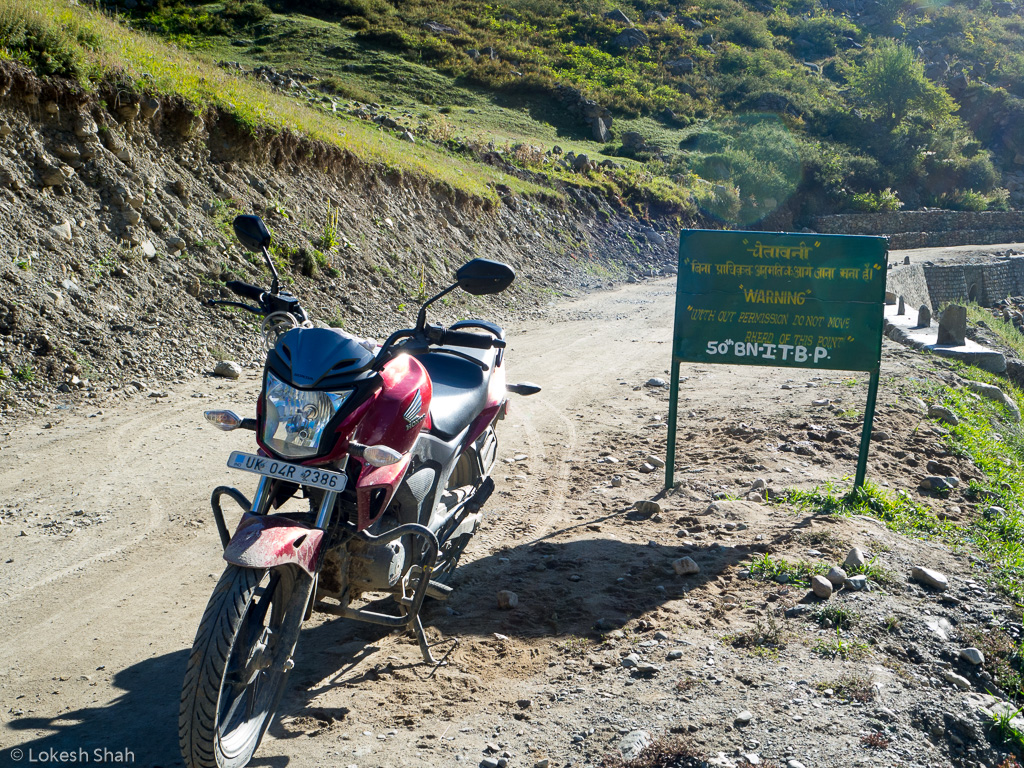 Last point on the Chitkul road. 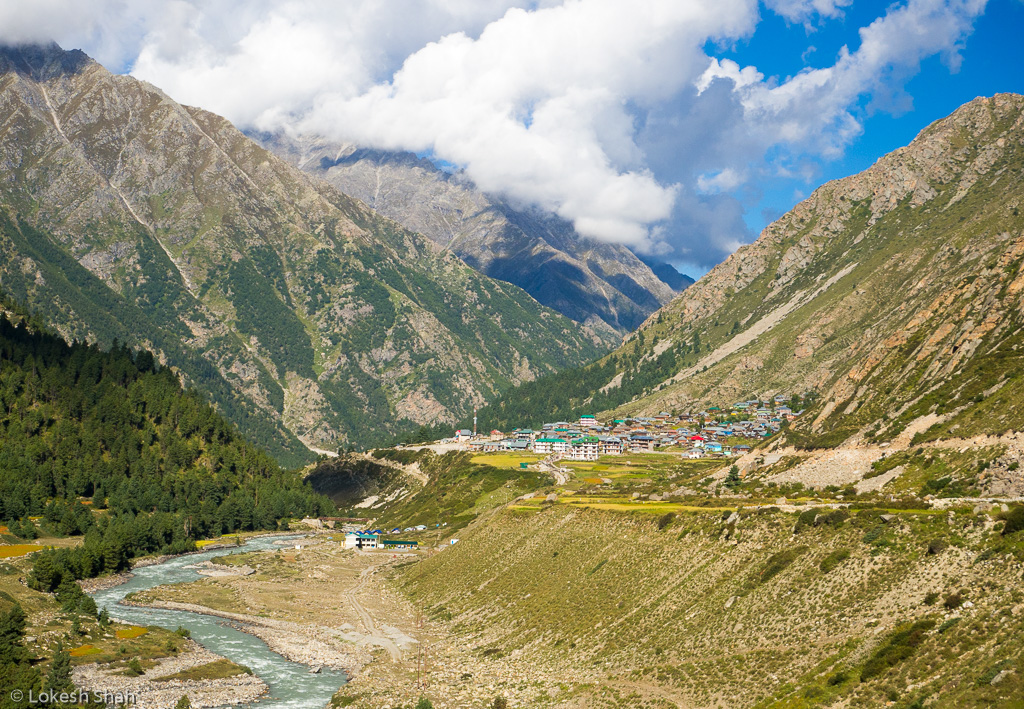 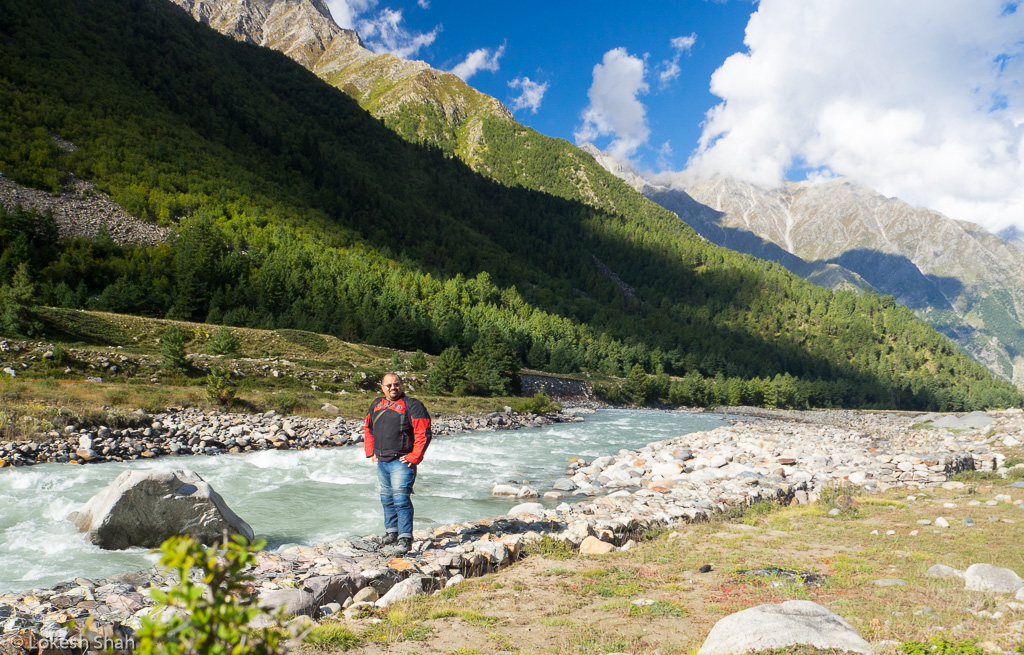 Hanging by the river.

By 0945 I was back in Sangla, sitting outside the hotel and chatting with the cook over a cup of tea. The warm sun felt good and I could have hung around for the entire day.

Lazily I packed my stuff, loaded the bike and started out.

Entrance to the Monastery at Sangla 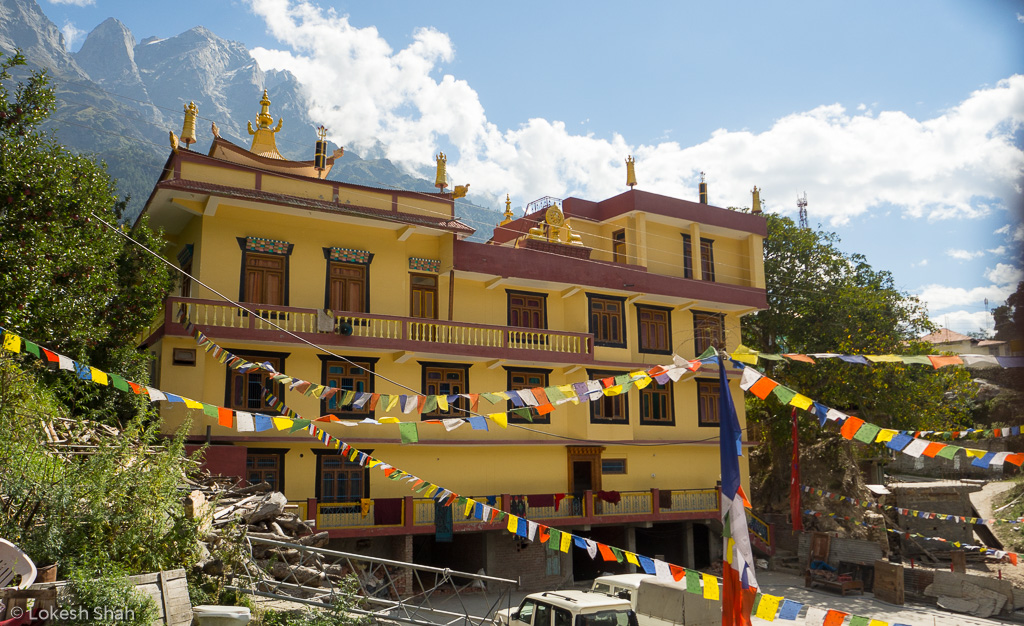 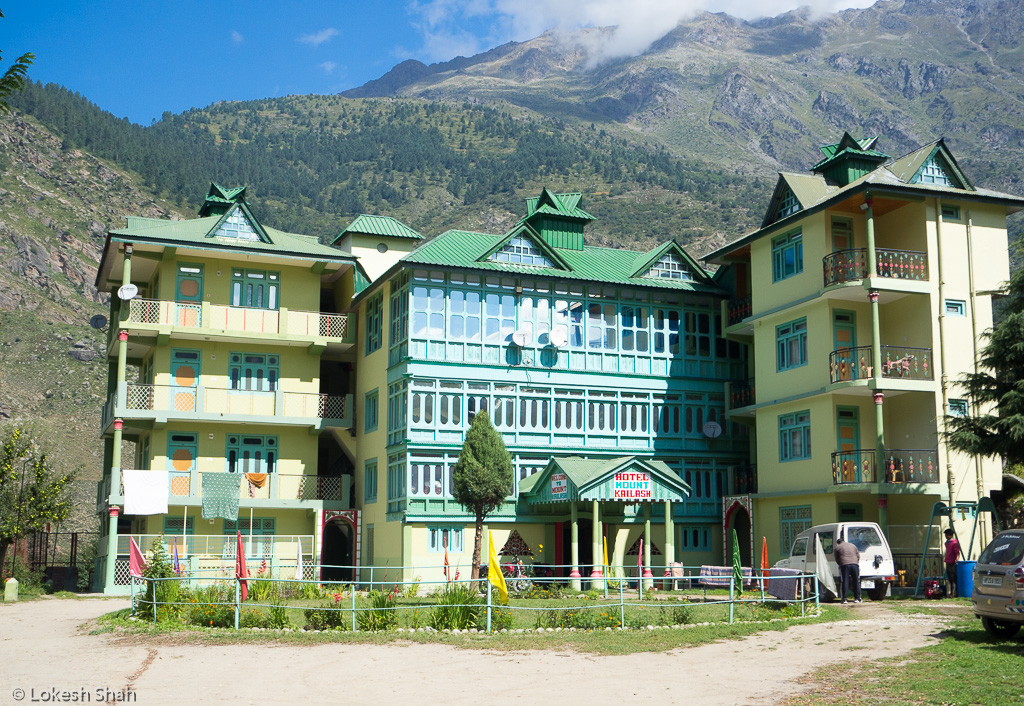 Hotel Kailash at Sangla. This was a nice and cosy place.

The ride down was much more comfortable as I had worn padded shorts underneath my riding jeans. While there were clouds, sun was nice and warm. I enjoyed the ride down to Karcham.

Confidence – a temple below a rocky overhang.

Reservoir on Baspa River behind the Karcham Dam

A closer view of the reservoir. Notice the clear water.

Confluence of Sutlej and Baspa rivers. The one on top with bluish-green waters is Baspa coming from Sangla. The black water below is Sutlej coming from Reckong Peo. 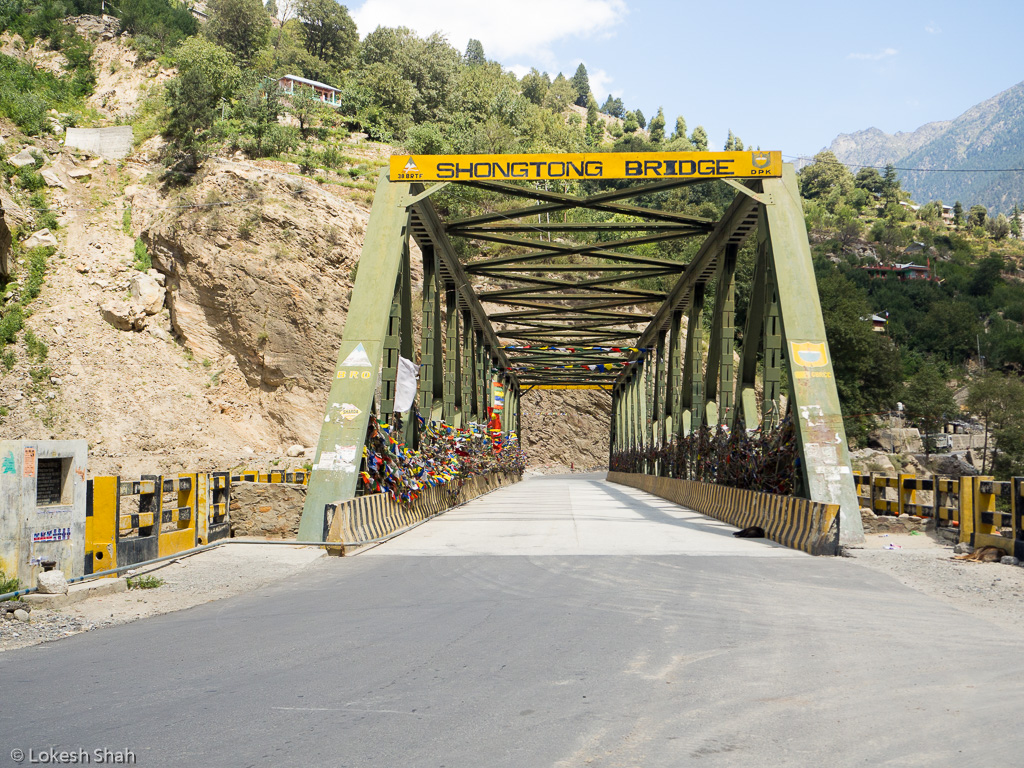 After Karcham, the road was good for a few Km and then the famously dangerous roads of Spiti start. The “shooting stones” boards appear frequently and BRO workers are all over making sure there is no blockage. The terrain also starts changing from tall trees to shrubs and eventually just rock and stones. Road conditions vary from excellent to pathetic.

Board indicating land slide area. The damaged road is seen above the board.

To cater to a large number of hydro-electric plants, tunneling has been done throughout the Sutlej valley. Entrance to a tunnel is seen far below above the river. 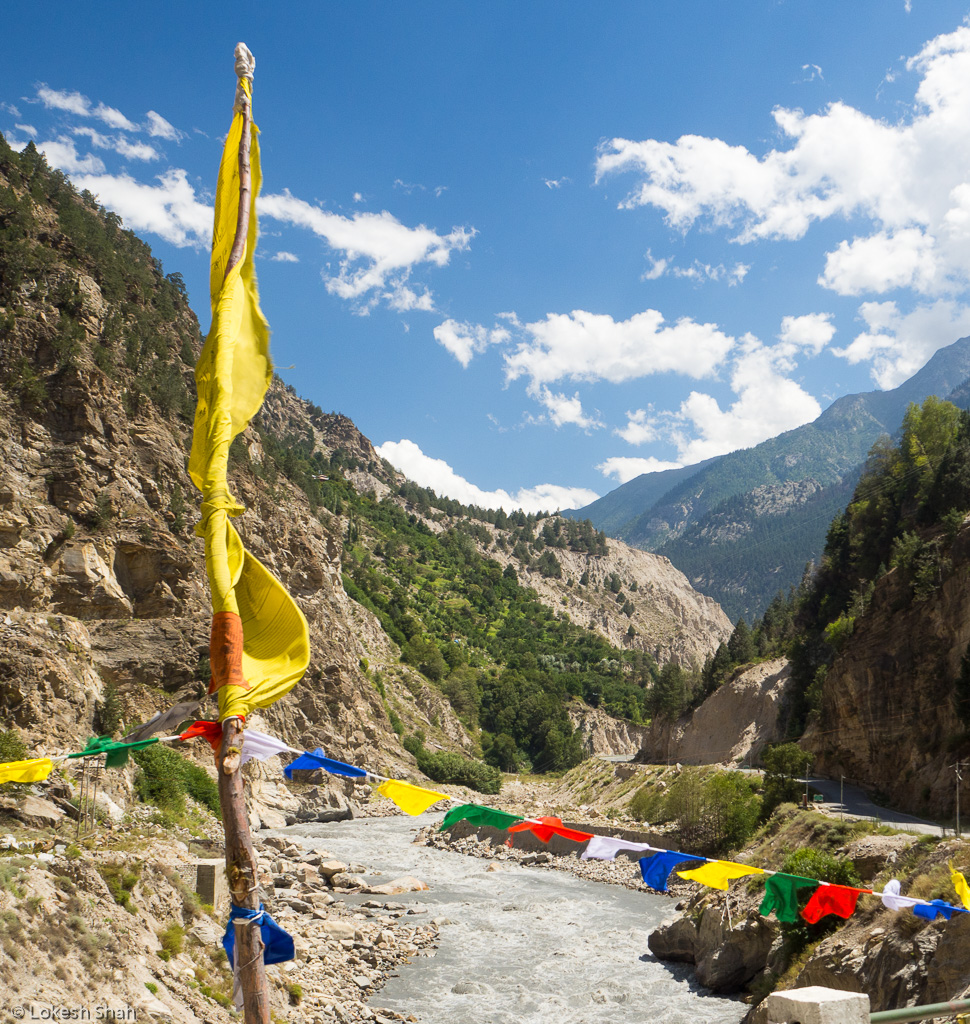 The road mostly follows the Sutlej river and crosses back and forth a few times. View of the river from one of the bridges.

Checkpoint to sign in. Non-Indians need a permit beyond this.

One of the good stretches of road.

After Karcham, the ride was hot and dirty due to the dust and up heating up the rocks. Stopped near Reckong Peo to fill petrol. Going was quite slow. It took me three and a half hour to cover 65 odd Km to Spello.

I was somewhat tired by Spello. Took a break at a small dhabha. Attracted by fresh jalebi and samosas being made, I had them for lunch. Over lunch I looked at the map and decided to stop at Nako for the night. A group sharing the table with me was planing to go all the way till Tabo. 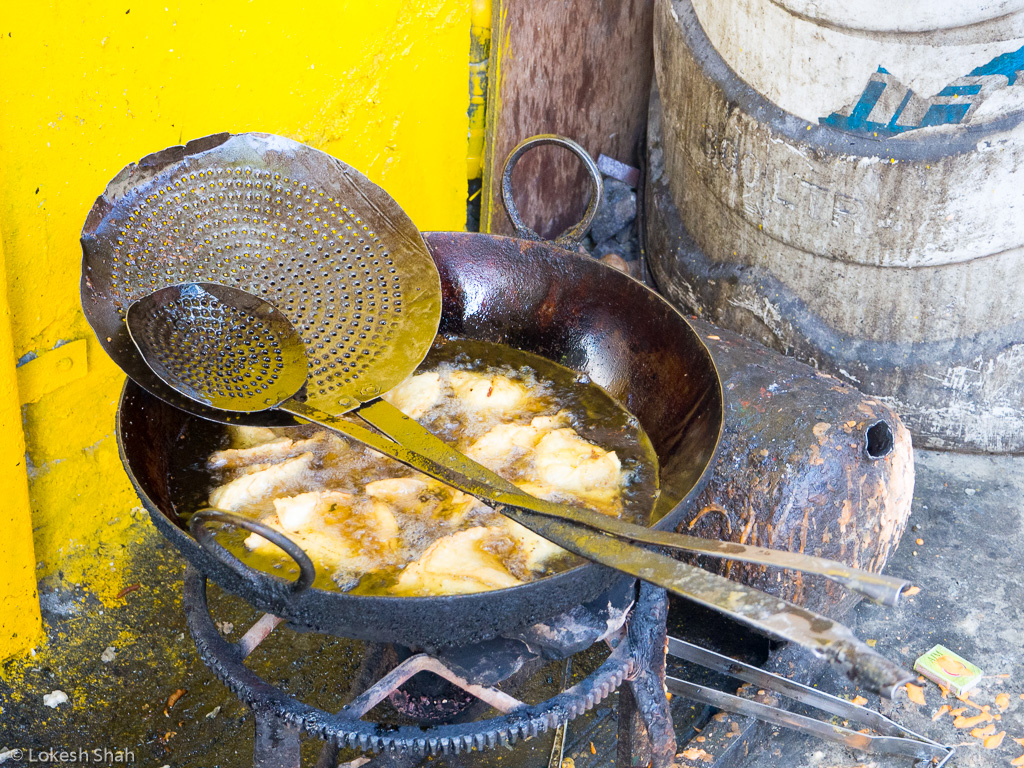 Lunch of Samosa, Jalebi and Limca.

Barren mountains with road cut through.

Roadblock due to a rock fall. BRO engineers are quick to clear and keep traffic moving.

Around 15Km after Pooh, we get to the confluence of Sutlej and Spiti River. The road to Spiti Valley crosses the river and enters the gorge of Spiti river and then rapidly climbs up through a series of switchbacks called Kazigs. Similar Gata loops on the Manali-Leh highway are more famous. 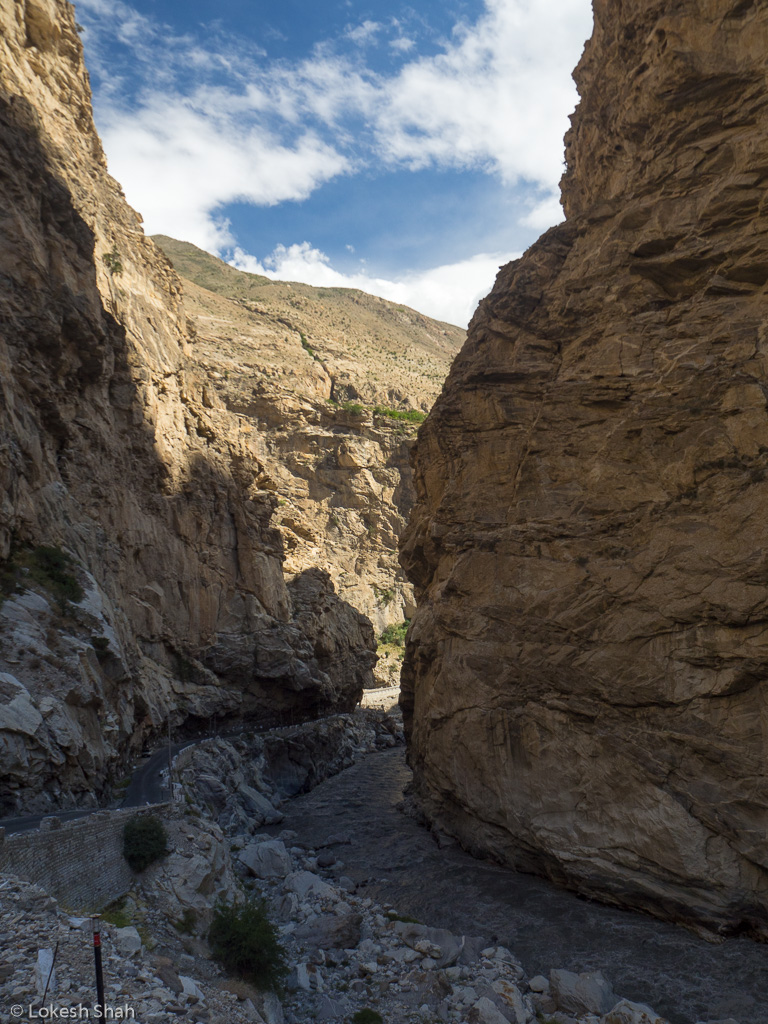 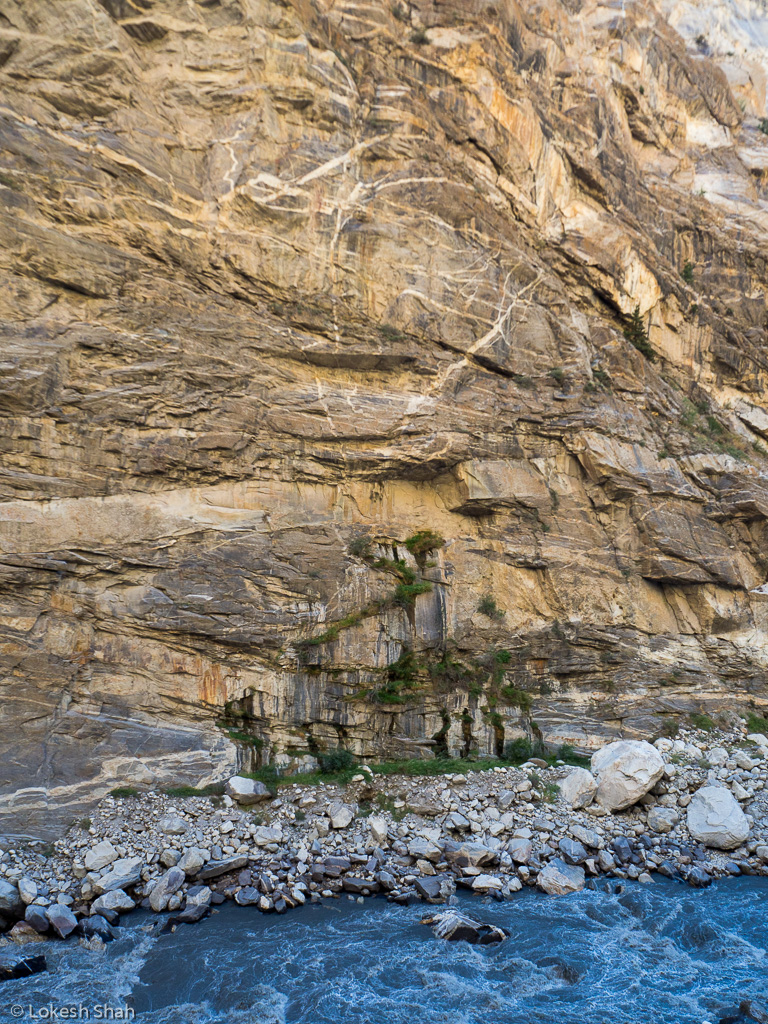 Patterns on the rock across the river.

On top of Kazigs. The switchbacks can be seen behind the sign.

Spiti river far below and the road marks a faint trail on the left.

After rapidly rising above the river, the road follows the river, gradually rising higher and higher. Far away peaks show a dusting of snow. The road is in a pretty bad state with small rock slides everywhere. 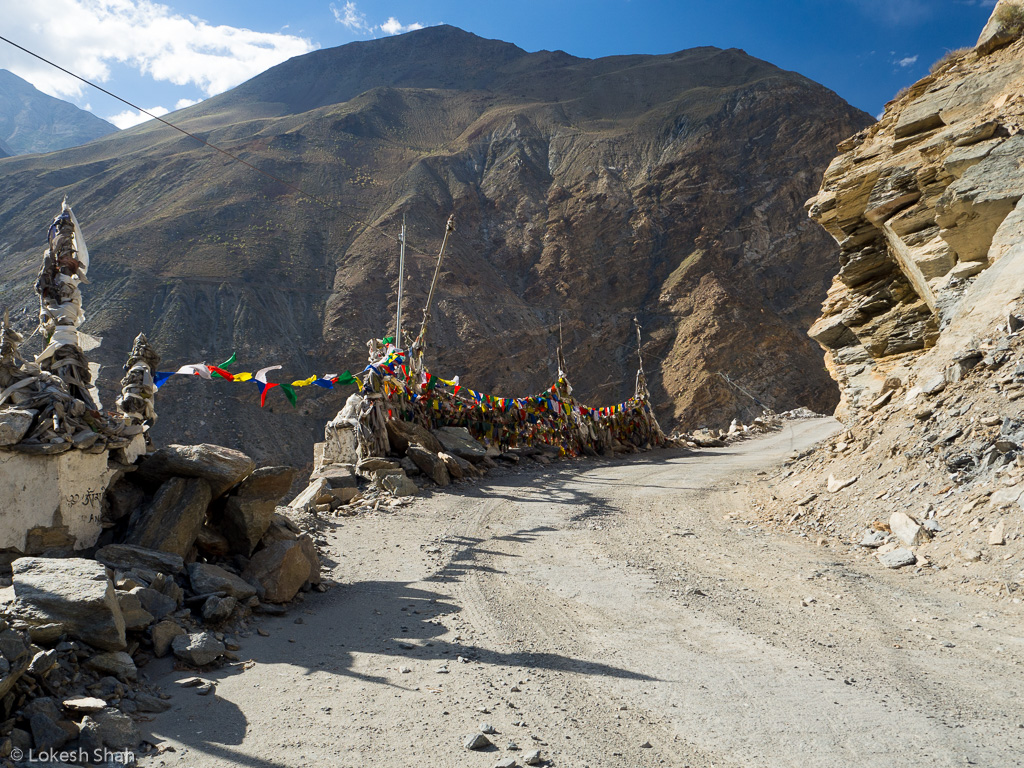 A precarious turning on the road with prayer flags to let vehicles pass without accident. 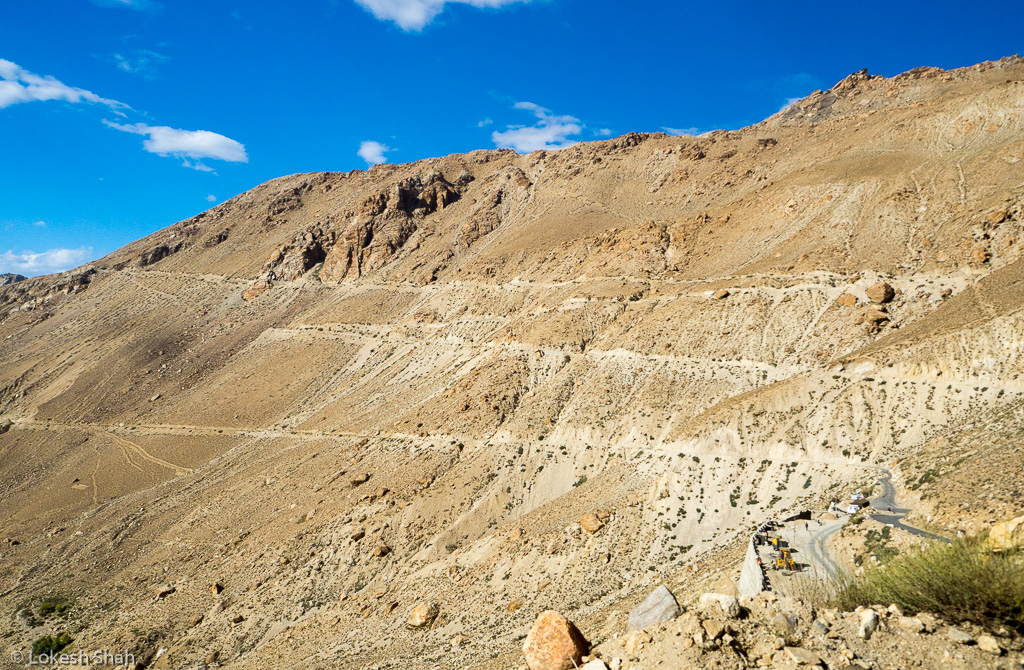 Climb to the Nako Village.

The new monastery building at Nako.

Rising high above the surrounding as the bike climbs to Nako.

By 1630 I was at Nako. Finding a place to stay was easy as every other house was a home stay. After some quick bargaining I settled down at Tashi Home Stay. The house is very near the Nako Lake and the terrace looks over the lake. 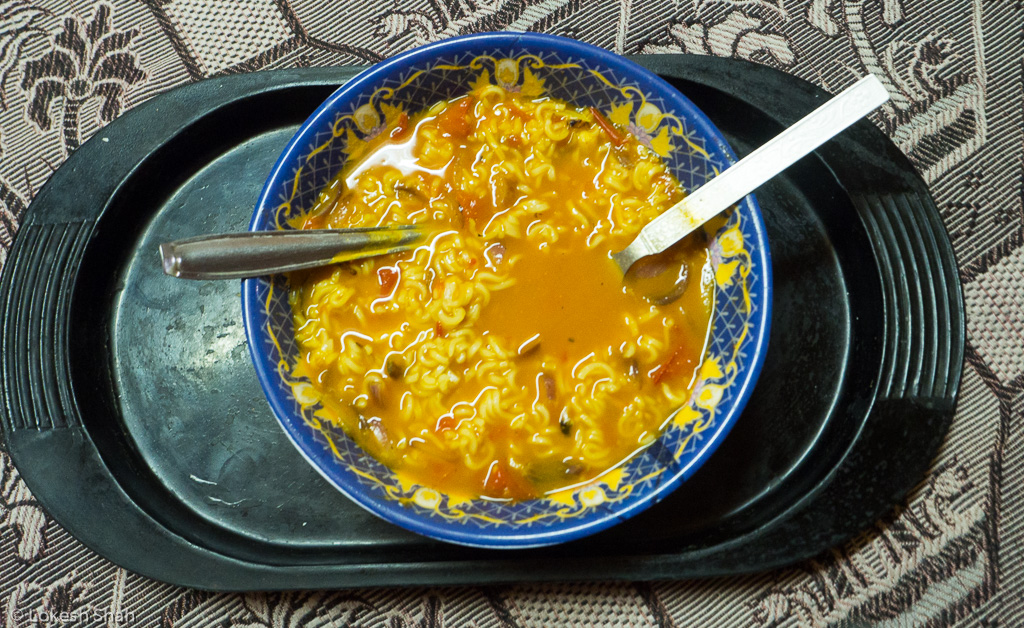 Had a bowl of Maggie to keep the pangs of hunger down and then settled down on the terrace to watch the sun set behind the clouds and mountains.  As the sun went down, it started getting windy and cold. So went inside and tucked under a nice thick quilt.

Pretty soon I was asleep only to be woken up an hour later by a kid’s noise outside. Stepped out to see a big group from Bangalore, staying in the same place. Chatted with them for a while.

Dinner was a simple affair of dal, rice, roti and sabzi. Would have preferred something local but had to settle down what was prepared for the others. Had dinner in the kitchen-cum-dining room of the homestay.